Gods and Demons Wiki
Register
Don't have an account?
Sign In
Advertisement
in: Items, Spirit, Human,
and 2 more

A Soul is the spiritual life essence of a person, which resides within a physical body while the person is still alive. When the creation of lifeforms happens, they gave them a spiritual essence or soul, so that after their bodies perished, they could move on to either be rewarded or punished, depending on the life they chose to lead.

The soul is the self, the "I" that inhabits the body and acts through it. Without the soul, the body is like a light bulb without electricity, a computer without the software, a space suit with no astronaut inside. With the introduction of the soul, the body acquires life, sight and hearing, thought and speech, intelligence and emotions, will and desire, personality and identity.

Upon conclusion of its physical life-span, the soul resumes a purely spiritual state. It can no longer perform any deeds, but the goodly deeds it performed during its physical lifetime have elevated it to heights it could not even had contemplated before its descent. These deeds are like seeds which take root in the soil of the physical world and grow and multiply, further fueling the soul's ascent; as do the good deeds performed in the physical world by others for the merit of the departed soul.

In truth, not just the human being, but also every created entity possesses a "soul." Animals have souls, monsters possess souls, along with deities, as do plants and even inanimate objects; every blade of grass has a soul, and every grain of sand. Not only life, but also existence requires a soul to sustain it; a "spark of godliness" that perpetually imbues its object with being and significance. A soul is not just the engine of life; it also embodies the why of a thing's existence, it's meaning and purpose. It is a thing's "inner identity, it's "raison d'être" according to Gabriel.

Souls are magical by nature and could be used by several creatures to cast spells or to increase their power. They are said to be impermanent and immune to harm. Only the most powerful entities are able to even destory a soul. It should be noted that while separated, they still shared a link that whatever physically happens to one happens to the other one. 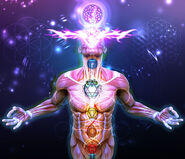 (Art by ???)
Community content is available under CC-BY-SA unless otherwise noted.
Advertisement