Gods and Demons Wiki
Register
Don't have an account?
Sign In
Advertisement
in: Races, Demon, Hell,
and 7 more

Presumably birthed from Lilith alone with her partners

A Succubus is a female sex demon known in European folklore during the medieval ages, which takes the form of an attractive female to seduce men before draining them of their life force during sexual intercourse or just devour them outright in the end.

They were either spawned from or created by the legions of Hell. They are said to have sexual intercourse with sleeping men and in the process draw energy from them sustain themselves, often until the point of exhaustion, the deterioration of health or the death of the victim. A Succubi's male counterpart is the Incubus. They are often associated with Baobhan Sith, a vampire with deer feet who seduce men and are afraid of iron.

Lilith and her daughters, the Lilim, are considered succubi. The Lilim were said to be the first succubi in existence and are the strongest of their kind with later succubi being a lesser species of the Lilim. These traditional succubi were conceived from the union between Lilith and Asmodeus, and were called Asmodai. According to legend, Lilith became a succubus after leaving Adam. Succubi encounters have also been theorized as an attempt to explain birth defects or sometimes adultery.

According to the Malleus Maleficarum, or "Witches' Hammer", Succubi collect semen from men they seduce. Incubi, then use the semen to impregnate human females, thus explaining how demons could apparently sire children despite the traditional belief that they were incapable of reproduction. It is generally believed that the best and possibly only way to prevent attack by or to banish a Succubus is through the art of prayer, particularly through the use of the ‘Saint Michael’s prayer’.

In the field of medicine, there is some belief that the stories relating to encounters with succubi bear resemblance to the contemporary phenomenon of people reporting alien abductions, which has been ascribed to the condition known as sleep paralysis. It is therefore suggested that historical accounts of people experiencing encounters with succubi may rather have been symptoms of sleep paralysis, with the hallucination of the said creatures coming from their contemporary culture. Furthermore, the experience of nocturnal emissions or "wet dreams" may explain the sexual aspect of the phenomenon.

The she-demons of today use intense charisma and seductive power to match their good looks. They ause characterized as clever creatures who can tantalize men with their words as much as their bodies. They can be domineering and vengeful if they are slighted, but they can ultimately take pride in their ability to please (and manipulate) men. The ancestors of today’s Succubi, on the other hand were characterized as being as nasty as their looks. They were characterized as being sneaky, controlling, and malicious. Despite being sex-crazed, they had no interest in pleasing men. Instead, they used sex for their own purposes to please themselves, to corrupt the pious, to gain life force, or even to have children.

The appearance of succubi varies just about as much as that of demons in general; there is no single definitive depiction. However, they are almost universally depicted as alluring women with unearthly beauty, often with demonic bat-like wings; occasionally, they will be given other demonic features (horns, a tail with a spaded tip, snakelike eyes, hooves, etc.). Occasionally they appear simply as an attractive woman in dreams that the victim cannot seem to get off their mind. They lure males and in some cases, the male has seemed to fall "in love" with her. Even out of the dream she will not leave his mind. She will remain there slowly draining energy from him.

In modern representations, a succubus may or may not appear in dreams and is often depicted as a highly attractive seductress or enchantress; whereas, in the past, succubi were generally depicted as frightening or demonic. They wear skimpy leather costumes, to flaunt their bodies, and they don’t try to hide the telltale signs of their demonic nature.

But these she-demons weren’t always so glamorous. From the dawn of their legend well through the medieval ages, Succubi were considered hideous, deformed creatures. They were somewhat smaller than average people, and they stooped and crawled instead of walking upright. Their feet were like raptors, their faces like gargoyles, and their fingers tipped in ragged claws.

They are capable of taking vessels, in their case, female humans who are either willingly or unwillingly connected with the demon, with the Demon being able to reside within and control the body of the vessel. All forms and vessels of succubi are infertile. The natural form of a succubus is that of a very shapely woman, with large, chiropteran wings (which sometimes shift to feathery ones in order to deceive their prey) or demonic features such as horns, a tail, hooves and fangs like a Vampire. They usually resemble female Satyrs or the Baobhan Sith.

They have supernatural abilities, largely involving seduction, including the ability to produce pheromones which cause feelings of almost unquenchable lust in men, and there are almost no beings in the world, male or female, which can resist the charms of a succubus. In fact, the world "succubus" is used often to describe any supernatural temptress.

They are capable of taking Vessels, in their case, female humans who are either willingly or unwillingly connected with the Demon, with the Demon being able to reside within and control the body of the vessel. All forms and vessels of succubi are mostly infertile, and they "reproduce" through a corrupting of a willing soul in Hell. If the forms aren't infertile, they may be able to reproduce with the male counterparts of their race.

They also have the powers to:

In India, a succubus is referred to as the seductress Yakshini. In India, they are described as a lone lady draped in a white sari, with untied long hair. She generally is said to haunt lonely paths or roads, and to have died from torment by a male, and thus would seek revenge on any male. The stories of Kalliyankattu Neeli and Kanjirottu Yakshi are examples. 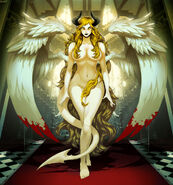 A Succubus in a more demonic form (Art from RPG Maker)

A Succubus (Art from Dungeons & Dragons)

Succubus attempting to seduce a man (Art from Monstropedia)

A Succubus (Art from Gwent)

A succubus resembling a female Satyr (Art from Gwent) 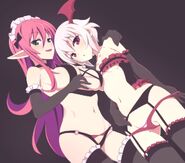 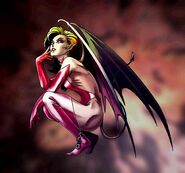 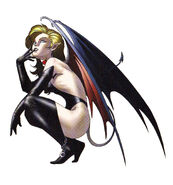