Gods and Demons Wiki
Register
Don't have an account?
Sign In
Advertisement
in: Beings, Deity, Primordial,
and 7 more

Tartarus is the Greco-Roman Primordial Deity of the Underworld and the Abyss that personifies all underworlds (including Hell).

Tartarus is the primordial god and personification of the location Tartarus in Greek Mythology. As a Primordial Deity, he is an entity who is barely even known by even the Titans. He débuts, with his appearance in around 700 B.C. and is very briefly mentioned.

In his physical form, Tartarus appears as a hundred meters monstrous humanoid standing at immense height, his purple glistening flesh rippling with muscle with a thick skin and eyes that glow when he uses his powers.

His fingers are tipped with razor-sharp black talons. However, his most terrifying and distinguishing feature is his face- in place of a normal face is a swirling whirlpool and inward spiral of darkness, and his voice sounds like it is being drawn back inward rather than projecting outward. Tartarus' black Stygian iron boots are each the size of a coffin, and his hands are as large as crane scoops. His breastplate has faces of gorgons, cyclopes, dragons and other monsters all pressing against his armor as if trying to escape. Tartarus can also take a form that is a hundred meters sphere with many eyes and tentacles and after his defeat, his body was reduced to five meters.

His body gives out a unbelievable aura and his presence also gives out a dark mist. The aura he releases is described as ominous, so terrifying that when the Archangel of Hope, Auriel, fought him, she nearly lost control of her powers after being overcome with fear and cried a little. According to Athena, Tartarus is so massive, and radiates such pure malevolence, that she wanted to crawl away and hide as soon as she saw him, and even dropped her spear in terror. Tartarus' laugh sounded like a mountain "cracking in half". According to Athena again, everything around Tartarus seemed to be drawn to him.

In its true form, Tartarus is an amorphous entity, like all of the primordials. His body is essentially the deepest and darkest domain of the Underworld, with the worst beings condemned by the Olympians imprisoned in his domains. However, when he went to fetch Cronus from his domain, the god was said to be an entity replete with a series of long spectral arms whose color is dark with twinkling stars.

Like its creator, although its real mentality is highly unknown, Tartarus has so far proved to be an impartial divine entity and completely devoid of feelings or even ideals, as it remained relatively neutral and ambivalent with the constant wars that were fought among the deities soon after the formation of the universe, not bothering to serve as "a living prison" where the gods send their most dangerous enemies, even if they are their own direct relatives. However, his impartiality has limits, as he joined Gaia in the past to bring down the Olympians, resulting in the birth of Typhon.

Consistent with the primordial responsible for the most terrible infernal abyss, Tartarus is a totally brutal, somber, sadistic, and terrifying entity that, like its domains, brings only despair and fear to all below it through the most exquisite forms of cruelty. He showed himself to be a highly arrogant god with an immense disdain and contempt for demons/fallen angels, angels and even the titans, whom he openly described as annoyances as after easily destroying them. However, Tartarus is honest and admits when someone forces him to take direct action, he will not hesitate.

He has claimed to have a taste for having a physical form and also showed delight in inciting terror in its victims. Like Gaia, he also takes great pride in his Gigantes children.

However, like some of his siblings, he also proved to be generally an impartial entity, to the point of being completely devoid of feelings and ideals as he remained neutral and almost ambivalent of the constant wars that were waged between the gods against the titans, and even claiming that he does not usually interfere. But at the same time, Tartarus's impartiality has limits, since he joined the other primordials more than once to defeat being like the Outer Gods and Aructhas. He is also seen as a fair and fierce underworld god, like Hades was. He is also seem to have a degree of contempt for Satan.

He is also known for being cruel towards the sinners and guilty. As he stated that their sufferings and agony is his joy, and claimed that they deserve to be punish in Hell for their misdeeds and sinful acts. Despite his seemingly cruel and terrifying nature, Tartarus is very honest and can be respectful to those who deserves it. The only beings, however, that he is cautious around are his creator, the primeval void Khaos, and the holy creator God, the supreme being of Creation.

As the Primordial of the Primordial Abyss, Tartarus proved to be one of the most powerful and terrible entities of Creation and infinitely powerful while in its domains. He is possibly one of the most powerful Primordials though Nyx and Erebus rival him with the sole exception of Khaos as he can suck in Titans whereas Gaia and Ouranos could not. Proof of his terrifying power was that even the Titans could not threaten him since he easily defeated Crius, Hyperion, Iapetus, Damasen and even Cronus without much difficulty. He far surpasses over Lucifer who is a powerful being on his own right. Despite having unimaginable amounts of power, he is not as unstoppable as he was able to be defeated by Calur.

He was created by Khaos to assist him in his conflict between him, Azathoth and God. Tartarus was born in-between Gaia (Earth) and Eros, preceding Nyx (Night) and Erebus (Darkness) and being the oldest primordial being except for his sibling Chronos.

Long after the conflict, Tartarus created the Greek Underworld, the first Underworld in Creation even before Hell. He had ruled from the realm below the Underworld which also called Tartarus along with Nyx and Erebus. It was created to imprison the most dangerous beings in Creation (example being the Titans).

He had ruled for centuries until the end of Titanomachy where he gave it to the God Hades. After the Titans defeat, Gaia and Tartarus had together birth the monster king known as Typhon.

In Greek mythology, Tartarus is both a deity and a place in the underworld. In ancient Orphic sources and in the mystery schools, Tartarus is also the unbounded first-existing entity from which the Light and the cosmos are born. As a god, Tartarus is often named as the father of the monstrous Typhon with Gaia; Tartarus is also occasionally named as father of Typhon's partner Echidna. Echidna and Typhon were famed for going to war with Zeus and the gods of Mount Olympus.

In ancient sources though, the concept of Tartarus as a god was marginalized, and the name was one more closely connected with the hell-pit of the Greek Underworld.

In the Greek poet Hesiod's Theogony, c. 700 BC, Tartarus was the third of the primordial deities, following after Khaos and Gaia (Earth), and preceding Eros and was the father, by Gaia, of his only son, the monstrous giant Typhon. According to Hyginus, Tartarus was the offspring of Aether and Gaia

With time, Hades came to overthrow Tartarus as the ruler of the underworld (hell-pit). Nonetheless, Tartarus continued to exist. It is from Tartarus that the Light and the cosmos came into existence.

Tartarus coming from a volcano (Art from Wrath of the Titans) 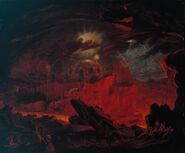