Gods and Demons Wiki
Register
Don't have an account?
Sign In
Advertisement
in: Articles that need art credits, Group, Human,
and 8 more

The Four Great Sages, also called the Four Sages, are a group of four humans of great knowledge and who were very important to the world, these being Jesus Christ, Sidarta Gautama, Socrates and Confucian.

The Four Great Sages were the four people who were very important to humanity, with the second eldest of the four members being Socrates (470-399 BCE), known for his famous phrase "I only know that I know nothing". Socrates is known as the first philosopher and responsible for the anthropological period, having started to look for the truth behind everything and everyone, trying to go beyond mythology and present new visions about the world around us. Socrates was accused of corrupting the youth of Athens and introducing false gods, and so he was sentenced to die by drinking hemlock.

The eldest of the Four Great Sages is Buddha (563-483 BCE), formerly known as Siddhartha Gautama, who was responsible for founding Buddhism, with Buddhists believing that Siddhartha would have attained Enlightenment, becoming one with the entire universe and its multiple parallels. Buddha ended up becoming an avatar of Vishnu, which indirectly made him connect directly with the One-In-All, one of the many avatars of Yesh.

Confucius (551-479 BCE) was a Chinese philosopher, whose ideas served as a norm for Chinese society for more than two thousand years and exerted a great influence on the entire culture of East Asia. He was also the founder of Confucianism. Confucius' principles were based on common Chinese traditions and beliefs. They favored strong family loyalty, ancestor veneration, respect for the elderly, and the family as the basis for ideal government. Confucius, like Buddha, died of natural causes.

The youngest of the Four Great Sages is Yeshoshu'a (4 BCE-33 CE), also known as Jesus Christ, the Nazarene and the Galilean, he was the most important person in human history, having been responsible for changing the whole world, having caused the New Age, also called the Common Era, having been the founder of Christianity. Jesus is one of God's avatars, likely the most important of them all, personifying His love and compassion for humanity, being the Second Member of the Most Holy Trinity, worshiped as the eternal Word and Son of God by Christians and Messianic Jews.

After Jesus died and ascended to Heaven, God organized a group with the Four Wise Men, and although the group needed a leader, none of the four decided to be each other's leader because of their humility, with the four agreeing that the best person to be your leader be the Source of All, God. The Four Great Sages are responsible for taking care of the Earth and helping humans through metaphysical and spiritual interactions, leaving ideas and guiding them surreptitiously to the path of good, without directly interfering with free will.

The Great Four Sages taking a selfie (Art by ???) 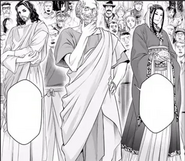 Three of the Four Sages (Jesus, Socrates and Confucius) (Art from Shummatsu no Valkryie)