Gods and Demons Wiki
Register
Don't have an account?
Sign In
Advertisement
in: Articles that need art credits, Group, Deity,
and 7 more

The Trimurti is a divine triad of the three second-generation primordial gods Brahma, Vishnu, and Shiva, the Supreme Divinities of Hinduism. It is an iconographic representation of God (specifically Brahman) in Hinduism, which depicts divinity as a three faced figure.

These three faces represent God's roles of creation, preservation and destruction, which are associated with Brahma (the source or creator), Vishnu (the preserver or indwelling-life), and Shiva (the destroyer and transformer) respectively. These three personae are thought to represent different modalities of the one supreme divinity.

These three forms or faces of the Trimurti represent God's roles of creation, preservation and destruction, which are associated with Brahma (the source or creator), Vishnu (the preserver or indwelling-life), and Shiva (the destroyer and transformer) respectively. Some Hindus use these cosmological functions of the three gods to create an acronym for "GOD"; that is Generator (Brahma), Operator (Vishnu) and Destroyer (Shiva).

A widely accepted belief is that the three gods seen together represent earth, water, and fire. The earth is seen as the originator of all life and hence is regarded as Brahma. Water is seen as the sustainer of life and is represented as Vishnu. Fire consumes or transforms life and is therefore considered to be Shiva. Alternatively, the three members of the Trimurti are conceived to be analogous with the three planes of consciousness: On the spiritual plane, the spiritual element is represented by Brahma, the psychic element by Vishnu, and the physical element by Shiva. On the psychic plane, Brahma epitomizes intuitive and creative thought, Vishnu is intelligence, and Shiva represents emotion.

In general, it can be said that the Trimurti has less of a role in the Hinduism of recent centuries than in ancient India.

Temples dedicated to various permutations of the Trimurti can be seen as early as the 6th century C.E., and there are still some temples today in which the Trimurti are actively worshiped. 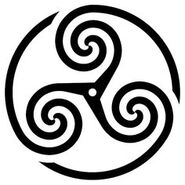 The Symbol of the Trimurti (Image from ???)

Trimurti with Tridevi (Art by ???)