Gods and Demons Wiki
Register
Don't have an account?
Sign In
Advertisement
in: Archangel, Angel, Rank,
and 4 more

The True Archangels are the highest rank of Angels who are the closest to God's magnificent light.

The true archangels are the chief angelic creations of God. These archangels are reputed as the strongest class of angel, being looked at as Heaven's most fearsome wrath. They were the first angels to be created by God. They were treated as god-like. They were also known as "Rav-Malakhim" or "Malakhim-Panav," who are the angels that stand before the lord himself. Archangels are one of the few bodies of angels that contact those on the material plane directly and are the ministers and messengers between God and mankind. Some of the most famous archangels include Michael and Gabriel who both appear in the Bible, although only Michael was named expressly as an archangel.

They were created in this explicit order: first was Michael and Lucifer, and then Raphael, Gabriel and Uriel. The archangels acted as siblings, and distinctively interacted with themselves and their father. Many other archangels came after those five including Metatron, Sandalphon, Azrael, Raguel, Remiel, Anael, Camael, Jophiel, Zadkiel, Barachiel, along with many others.

The archangels are powerful, angelic beings created by God before other angels. They were imbued with immense power empowered by the holy light of God, and with god-like power and strength far surpassing that of lesser angels, demons (and possibly archdemons), and most other supernatural beings, also they were more powerful than even the chief deities of all pantheons of many pagan gods. Zariel describes them as "fierce and absolute." They appear to be the angels that one angel described as having personally seen God. According to the primordial deities the first true archangels to ever created (like Helel/Lucifer, Michael, Gabriel) known as the primordial true archangels, are at least equal or rival some of the lesser outer gods in power, so much that they managed to battle and destroy some them along with their Arcuthas brethren, that they strike fear and light in the hearts of their enemies at the time, and even at least rivals some of the primordial deities and cosmic entities, that they we're known and feared across creation.

According to some texts, archangels are also the primary warrior race of angels and are known to be at constant war with the fallen angels. It is even suggested that Lucifer was an archangel before his fall from grace, however, he was commonly seen as a Seraphim. The most prominent archangels are Michael, Gabriel, Raphael, Lucifer, and Uriel. These archangels were the first angels to be created in existence and thus are among the most powerful of their kind, more so than lesser archangels. After the War in Heaven, a new group was created to counter the Seven Princes of Hell, they are known as the Seven Archangels.

Some point after God and the Arcuthas fought Khaos and Azathoth, and the Outer Gods and together, while they were unable to fully destroy them, they succeeded in binding them. God then imprisoned Azathoth and the Outer Gods in the "Outerverse". It had appeared that the Arcuthas were corrupted by Therion, so they all fell. God replaced them with the Archangels. God had then fully began Creation with Archangels and Primordials being tasked to maintain it along with him.

Later on, when God learned of the Great Old Ones, he tasked his archangels to finding and destroying these Eldritch beings. The archangels were mostly successful in destroying some of these beings, however, many of them were unable to be destroyed as they turned out to be slivers of the primordial chaos and thus are technically nothingness itself and not fully physical beings. Instead of destroying them, the archangels would simply imprison them. They would then request the deities of Pagan religions to watch over the Earth and make certain that the Old Ones would not rise while they repair the universe alongside their father.

The Rest of them

(Art from League of Legends)

A True Archangel standing triumphant over a Fallen Angel 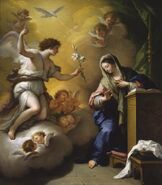 A True Archangel (Art by Damjan-Gjorgievski) 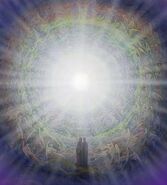