Gods and Demons Wiki
Register
Don't have an account?
Sign In
Advertisement
in: Articles that need art credits, Beings, Deity,
and 11 more

Tupã is considered to be the creator deity in Guarani mythology, and more specifically the creator of light. His residence is the Sun. Tupã was not exactly a god, but rather a manifestation of God, "in the form of thunder".

Tupã is energy and is in everything from the inspiration of life to the sigh of death. Responsible for the things that exist and the things that are yet to come. Its presence is manifested both by the gentle touch of the breeze and the rumble of thunder. The characteristics that resemble the Christian God were attributed to him through the Jesuits.

However, there is also his association with the major god, Nhanderruvuçú, but he is in fact his envoy. This supreme god has no anthropomorphic form and is energy in its purest and most essential state. Nhanderruvuçú's envoy is the creator of human beings and it was he who made the first man and woman in his image and likeness. He is a benevolent and merciful god, as in some stories he resembles the Greek god Zeus, famous for extramarital affairs and bearing some illegitimate children. This god is a supreme being whose voice was heard in storms.

Tupã was known for his personality. It is how many people remembered him. He was a very seductive/sexual god (like most god of gods in mythology). This led to his many children. Tupã and Arasy counselled the humans to live peacefully, too procreate, and to live in love. Tupã then created the spirits of good and evil, Angatupyry and Tau, and left them to guide the people down one path or another and departed back into the heavens.

Before the creation of the human race, Tupã wedded the goddess Arasy, the mother of the sky whose home was the Moon. According to the myth, Tupã and Arasy descended upon the Earth one morning after their wedding, and together they created the rivers and the seas, the forests, the stars and all the living beings of the universe. It is said that the location they stood while creating these things was atop a hill.

Tupã and Arasy met through a constellation of stars, and it took them years to find one another.

Creation of the human race

After the creation of all the things in the earth, Tupã set to creating the first human couple on the earth. For his creation, Tupã used a mixture of clay, juice extracted from yerba mate, blood from the Short-tailed Nighthawk, the leaves of several kinds of plants, and finally a centipede. He made a paste of this mixture, using the waters from a nearby spring that would become Lake Ypacaraí. From this paste Tupã created a pair of statues in his image, and left them in the sun to dry and filled them with life. The newly created humans were placed in front of the gods, and the woman was named Sypave by Arasy, and the man was named Rupave by Tupã.

In the beginning, there was only one entity in the universe which was Yamandu also known as Nhanderuvuçu, or the "Silence that illuminates all". Yamandu, wanting to know its dimensions, he looked inside himself and saw that it was vast, so he saw that he needed to create something there within himself, so the primordial god sang and the stars began to be born from his song; until all the worlds were created. Yamandu then turned into the sun, and from the wind of that sun Tupã was born, who had been born from Yamandu's own heart.

One day, Tupã dreamed of mother earth and upon waking up he created a petyngua from his thoughts, he then blew the petyngua and a silvery and luminous serpent was born, which was mother earth. After mother earth wandered through space she repolished in a place near Yamandu and turned into a turtle; Tupã went to his hull and there he drew all the continents, rivers and so on. According to tradition, Guaraci, the sun god one day got tired of his eternal office and needed to sleep. When he closed his eyes the world fell into darkness. To lighten the darkness while he slept, Tupã created Jaci, the moon, a goddess so beautiful that when Guaraci woke up by her light, he fell in love with her. And so delighted, he went back to sleep so that he could see her again, but when the sun opened its eyes to admire the moon, everything lit up and she went to bed, fulfilling her mission. Guaraci then asked Tupã to create Rudá, love and his messenger. Love knew no light or darkness, it could unite them at dawn.

Often, Tupã and Yamandu are represented as the same being, 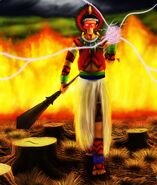 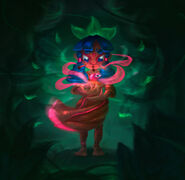 The Spirit of Thunder (Art by Filipe Sant'Ana)