Gods and Demons Wiki
Register
Don't have an account?
Sign In
Advertisement
in: Beings, Deity, Finnish,
and 15 more

Ukko is the Finnish god of the sky, weather, harvest, fire, the oak tree and thunder, and the leader of the pantheon.

Ukko's domain and court was in the heavens, where he ruled with his wife Akka, and held the epithets Ylijumala (Supereme God) and Pauanne (Thunder). He also reigned over lesser spirits of his domain, similarly to the sea-god Ahti, the forest-god Tapio and the underworld-god Tuoni.

As the god of the sky, he controlled the weather and all it's phenomena, such as rain, storm and lighting. The god was known to use thunderbolts as weapons, which known as either the Ukon vaaja (bolt of Ukko) or the Ukon nuoli (arrow of Ukko). Other weapons he used was the Ukonvasara (a hammer or axe which could generate lighting) and a flaming sword.

Ukko was worshipped as god of weather and fertility, and received sacrifices in the form sheep-meat which was placed in a birch-bark chest, which in turn was placed at a holy site. The god would eat his share of the sacrifice at night, while the people eat what remains the next day. Warriors also prayed to him, hoping he would drop an Umpiputki, a magic charm which could protect the them during battle.

It is possible that the Birch bark letter no. 292, written in a Baltic-Finnic language and unearthed in Novgorod, makes use of the metaphor, also referring to Ukko as doom-god according to one interpretation translateted by Yuri Yeliseyev in modern English and interpreted in modern Finnish: God's arrow, ten is your name. This arrow is God's own. The Doom-God leads. The name Ukon vaaja was also used of Neolithic stone tools such as battle axes, which were employed as thunderstones to be buried at the corners of dwellings

Thunderstorms were sometimes interpreted as result of Ukko copulating with his wife Akka (Finnish: Old woman). He also was believed to cause thunderstorms by driving his chariot through the skies.

A viper with a serrated line on its back was considered a symbol of thunder. Neolithic stone carvings have been found in Russian Karelia which have features of both snakes and lightning. It is, however, uncertain whether these are directly connected to the figure of Ukko. Evidence for worship of snakes is found among different cultures around the Baltic, amongst them Estonians and Finns.

There is evidence that the rowan tree was held sacred to Ukko. Rauni, a vaguely defined being has been hypothesised to be cognate to Germanic words for the rowan tree through Old Norse *raunir. 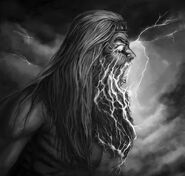