Gods and Demons Wiki
Register
Don't have an account?
Sign In
Advertisement
in: Beings, Angel, Archangel,
and 8 more

Urial, Urizen, Nuriel, Uryan, Jeremiel, Vretil, Sariel, Suriel, Puruel, Phanuel, Archangel of Wisdom, God is My Light, Archangel of Fire, Torch of God, Angel of the Divine Presence, Archangel of Salvation, Fire of God, Regent of the Sun, the Gate Guardian, SCP-001, The King of Light

Uriel is the True Archangel of Wisdom and Retribution that shines the light of God’s truth into the darkness of confusion.

Known as the Fire of God, Uriel is listed as one of the four main archangels, the other three being Michael, Gabriel, and Raphael along with one of the Seven Archangels as well.

People sometimes ask for Uriel’s help to seek God’s will before making decisions, come up with fresh creative ideas, learn new information, solve problems, resolve conflicts, let go of destructive emotions such as anxiety and anger that can prevent them from discerning wisdom, and recognize dangerous situations so they can try to avoid them.

She is said to carry the stars in the sky, and on the final day of judgement, she will oversee the resurrection and retribution of human souls. According to the Apocrypha, Uriel was the guardian to the gates of the Garden of Eden. She is associated with the month of September.

Similar to that of other angels, Uriel is seen to change her appearance at will. Uriel's humanoid form is a beautiful young woman with either with long, wavy blonde hair with a split bangs at the crown of her head, and purple or lue eyes. She has twelve golden wings and a halo on her head.

While in Heaven, she wears a royal outfit that covers her entire body, except her head. Uriel also possesses the ability to change the size of her hair at will, such as making her hair became longer and wilder. However, Uriel is also sometimes seen with her hair grown out and braids most of it into a ponytail.

Despite being the youngest of the archangels, Uriel is regarded as one of the most mature next to Michael. She is the more reasonable of the angels aside from Gabriel and is said to be a bit of a perfectionist. She shows a surprising amount of humanly personality traits, though while often really calm and contended, she will have her moments of sass and annoyance given that she also has quite the responsibility by guarding Eden. As the Archangel of wisdom, she oversees most of Heaven's affairs herself, and is always well informed about the going-ons in Heaven.

Uriel, unlike most of her brethren, deeply cares for her fallen brother Lucifer. While the other angels, including Michael, have seen that Lucifer is beyond saving, Uriel still believes that there is still a glimmer of good within him and that he is simply consumed by rage and hatred, and that he must be shown the love and acceptance he once adored and cherished by his family. Uriel would even go so far as to provide nourishment for the fallen angel during his imprisonment. Lucifer himself displayed numerous times, greater affection towards Uriel than others.

Uriel states herself as "usually quite pure/well-behaved" but also "scheming", and Gabriel states her ways as "not quite ruthless". She also consistently refers to herself as "black-hearted" and is referred to as such by other high ranking angels from Heavens factions.

She was described by Cassiel as what humans might call "a specialist". According to Zariel, Uriel is the "funniest" in garrison of true archangels, something that John Constantine himself bemused, noting that he believed Uriel had a better sense of humor than many of her companions. According to Lucifer, Uriel is a stubborn angel. When she sets his mind, she doesn't waver. Growing up, Uriel looked up to her elder siblings. He kept trying to play with them no matter how many times they excluded her.

As a True Archangel, Uriel possessed the common powers and abilities inherited in all angels though to a greater degree. She overpowered many rebel angels in the War in Heaven.

Uriel was created as the last of the five main true archangels by God in order to give him company. They were later used to combat the remnants of the creatures created by Azathoth. As each of the five archangels were unique in terms of their power so was Uriel but this was especially prominent as she could wield the power of Vril more effectively than her own siblings. Using the flames of God, Uriel would help turn the ties against those eldritch beings during the ensuing battle.

Uriel's flames would extinguish the darkness that attempted to encompass the infant universe. And upon defeating those remnats, God personally casted the suriving Old Ones into the Outerverse. However, Uriel and her siblings noticed that they spawned beings known as the Great Old Ones and were then tasked by Asherah to find them and destroy them, later receiving aid from the deities of mythology.

Uriel was present during the creation of Heaven and all that resides within the multiverse. During which she, alongside her siblings, would help in stablizing the fundamental forces that began to emerge throughout existence in order to have it properly running and would craft celestial bodies alongside Lucifer particuarly ones with a more fiery aspect such as suns. Uriel was the one that carved the path to Heaven by lighting a specific set of divine suns. Whereas Lucifer would create the suns, Uriel would provide these suns with the flames of Heaven as a way to create a path towards Heaven for wayward souls, as such the suns would in a sense be like torches.

Despite being the youngest of her siblings, Uriel was more or less the most mature out all of them with the exception of Michael of course. Back then, however, she was a bit more high-spirited and energetic which bounced off rather well with some of her siblings, especially Lucifer as the two have bonded quite closely. Uriel would tend to the warmth of the fires that coursed throughout Paradise and would keep watch over certain angels that were under her wing. These angels would be akin to her students and ones that were specifically chosen to tend to the flames of Heaven and God.

Like the rest of the True Archangels, she possessed her a garrsion, her own host of angels. One of the angels she liked the most in her host was the angel Flumenel which she made very clear. However, she woudl in time unknowingly take all of his accomplishments as her own which made him jealous and angry towards her.

Uriel saw the development of mankind and was one of many to prostrate before these new creations, all except for a couple who did not bother to show. To her dismay, one of them was Lucifer who gave antagonism towards humans for their inevitble savagery and cruelty.

Uriel was one of the many participants in the War in Heaven, however, much like her siblings she was disturbed and heartbroken upon hearing the news that Lucifer was the cause of the uprising but especially to her as she Lucifer mentally lose himself. Nevertheless, she steeled herself and prepared to fight off any of the rebel angels that came near the abode of her father even if these rebel angels were once her siblings as well.

Uriel first fought against a hivemind of angels that would come to be known as Legion. These rebel angels would attack the opposing angels by converging upon them and then devouring their wings and essence in order to strengthen their numbers. They attempted to reach the Crystal Spire like a swarm of starving locusts only to be destroyed by Uriel with a single attack and had their corpses thrown out of Heaven alongside the rest of the rebel angels. After defeating her, she would be tackled by Flumenel who joined Lucifer's side due to his jealously aganist Uriel. With how close they were, she tried to convince to come back but had failed and so fought the rebel angel.

After he was defeated alongside Lucifer, Beelzebub, and Asmodeus, Uriel found and apprehended Belphegor, bringing him before God who then punished him alongside the rebels for not choosing sides.

Uriel witnessed the creation of God's latest achievement in the form of Adam and Eve. She also was said to have escorted Naamah, Agrat Bat Mahlat, and Eisheth Zenunim out of the Garden when they refused Adam's proposal. Sometime later, Uriel would spend the majority of her time on the sun that was nearest to Heaven, contemplating the events that have transpired. It was hinted that Uriel fell into a depressive episode from witnessing the horrors that occurred within Heaven in regards to the civil war as well as her beloved brother's fall from grace. As such, she alienated herself from the others for a time.

Uriel was then notified by Adam and Eve's defiance against God when they ate the Forbidden Fruit from the ree of Knowledge. She saw that the angel Gadreel, who was supposed to be guarding one of the gates to Eden, failed in his task in preventing the serpent from entering the Garden. He not only allowed the Devil to enter but also Lilith herself. Gadreel was relieved of his duties as the gate guardian with that position was instead transferred to Uriel herself who became the new guardian of the Garden of Eden and was given her signature fire sword.

Once Uriel, Raphael, and Gabriel were present before God to testify on behalf of humankind. They saw the spread of corruption, evil, and sin from the actions of the Grigori, a host of angels that were tasked to watch over the development of humanity but never interfere, who end up lusting after the mortal women and conceived powerful but monstrous children known as the Nephilim. Uriel is responsible for warning Noah about the upcoming great flood.

Although she is never mentioned by name in any of the widely accepted holy scriptures, her name also means "Flame of God" for her depiction of holding a flaming sword, although that depiction is usually attributed to Michael, as her main weapon is a bow and arrow.

The role of Uriel in Christian apocryphal traditions is different from answering Ezra's questions. She is said to have rescued John the Baptist from the Massacre of the Innocents (the murder of all boys under the age of two in the area of Bethlehem) as a child and reunited him and his mother Saint Elizabeth with John's cousin, Jesus.

Uriel is often described as a cherub and the angel of repentance and is the angel at the Gate of Eden. In The Apocalypse of Peter, Uriel is shown to be as cruel as any demon when enforcing repentance. She is also supposed to be one of the angels that buried Adam and Abel in Eden.

The Book of the Watchers as a whole tells us that Uriel, Raphael, and Gabriel were present before God to testify on behalf of humankind. They wish to ask for divine intervention during the reign of the Grigori (fallen watchers). These fallen take human wives and produced half-angel, half-human offspring called the Nephilim. Uriel is responsible for warning Noah about the upcoming great flood. 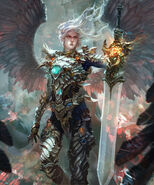 Uriel as a warrior (Art by Antilous chao) 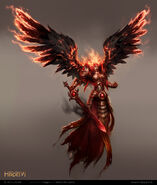 Uriel appears before Eve (Art by ???)

Uriel in a male form (Art by Wen-M) 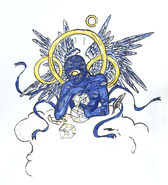