Gods and Demons Wiki
Register
Don't have an account?
Sign In
Advertisement
in: Beings, Deity, Demiurge,
and 5 more

Yaldabaoth
The Great Winnower
His/Her Undulating Vastness
Saklas
Samael
Nüwa
Važjum
The Beast
The Demiurge
God of Flesh
Great Dragon in the Great Brass Cage
The Elder Being
The Blind God
!YAL-DA-BA-OTH
Man's Blind Progenitor
Black-Blooded Creator Lurking in our Marrow
He who made Flesh
He who made the Body
He who made Gold and Steel
SCP-5001-A
Angra Mainyu
Nammu
Thalatth
Thalassa
The Mother Dragon
Yabba Dabba Do
Yatheppataotl

Važjuma is an old god of the SCP mythos. Sarkians believe he is one of the main powers of the universe and indirectly the creator of all life.

Važjuma is the God of Flesh and Animal Instinct, he was supposedly responsible for creating Humanity with the help of Mekhane, but after humans chose to give way to intelligence over animal instinct, it left Važjuma very upset and he wanted to that Mankind pursued His goal for mankind, but Mekhane stepped in and trapped him with his own body.

After being freed from Mekhane's trap, he made Važjuma want to destroy all dimensions, realities and space-time in revenge against Mekhane. Most of Važjuma's knowledge originates from Sarkic's scriptures and religious texts. Although most Sarkians revere Važjuma, they do not worship him or any other god.

Važjuma is often depicted similar its Gnostic counterpart, as a serpentine figure with a lions head. During the Xia Dynasty of China, Važjuma was drawn as a dragon by Sarkics who lived in the country . Private Morton Baker described Važjuma appearance a nine foot tall Satyr with the combined appearance of individuals infected by the Red Death.

Važjuma is a blind monsterous god driven by an animalistic instinct.

War of Flesh and Metal (Art by SunnyClockwork) 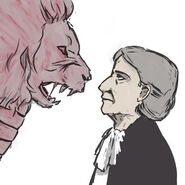