Gods and Demons Wiki
Register
Don't have an account?
Sign In
Advertisement
in: Beings, Original, Animal,
and 10 more

Virgo, Spawn of Maria, Girl Fox, Future Goddess of Foxes, The Purest of the Seven

Virgo, also known as Virgo Durand Leroy, is the youngest daughter of Maria Durand Leroy, being one of the seven ancient creatures of the Prediluvian era who were transformed into human beings by Maria's shape-shifting powers. She is practically a Gnostic and believes that Jesus is the true and only good and glorious deity in Creation alongside His Father.

Originally, Virgo was a common fox that inhabited Earth during the year 2,500 BCE, being an extinct species of fox. When the Flood waters came, she managed to escape for a while by hiding on top of a mountain, where she was found by Maria, then known as Magna, who caught her before the flood waters reached the top of the mountain.

After the Flood passed, Maria took her animals, including Virgo, and gave part of her soul to them, which made them gain consciousness, and also her power, which consequently made them inherit some of her abilities, being able to attrompormify/personify themselves in human forms. Virgo became Maria's daughter closer to her mother, with her eventually becoming her agent or "secretary", in order to accompany Maria on her missions.

Virgo is a shapeshifter, having inherited her mother's shapeshifting abilities. Originally, Virgo had the appearance of a fluffy white fox with many tails.

In her anthropomorphic form, Virgo initially appears as a cute little girl with long, white hair, fair skin, and golden eyes. Despite taking on a humanoid form, she usually has fox-like ears and tail on her body, although she can also hide her animal features. When in battle, she can assume a more mature and attractive form, having a much more curvy figure, and wearing less clothing.

Virgo in human form wears sunglasses constantly to hide her primal eye. When in animal form, she often pretends to be Carl Black's pet or a member of the Revelation Rangers, so they lie saying the glowing eye is an ornament.

In her battle form, Virgo drastically changes shape from her normal form. When in fox form, Virgo is less than 30 centimeters tall, however, when she transforms into her assault mode Virgo transforms into a colossal fox over 300 meters tall. But size isn't Virgo's greatest attribute, it's the fact that she transfigures herself into a colossal figure made of fire and plasma, shining a million times the Sun itself. When in this form, Virgo becomes invulnerable, intangible, and immortal for forty days and forty nights, not needing to eat, sleep, or drink water.

Upon obtaining the two eyes of Creativity, Virgo transcended all existence, reaching a level of power beyond anything in the Megaverse, with her body now having become a multiverse of its own, containing thousands of millions of universes within her body. Externally, Virgo appears as a multi-universal fox with thousands of glowing dots on her body that are the countless universes she possesses within her body. She is billions of times larger than the Prime Universe, possessing nine long tails and her Eyes of God containing the Megaverse's reflection.

Despite possessing the calmest and gentlest personality among her siblings, Virgo is still an entity of great wrath, and when angered she can cause great damage. The reason for this is that she was raised by Maria who was angry with God for what had happened to her and her family during the Flood, something that was passed on to her sons and daughters. Virgo, however, does not hate God like her mother, directing her anger only at his avatar who she considers to be a false god, Yahweh. She also doesn't seem to care about the other shards of God like El Shaddai or Elohim, saying they are all "coin in the same bag".

Virgo is Gnostic, that is, she believes that the world is divided into two spheres, one of matter and one of mind, with the God of the Old Testament being a Demiurge and tyrant. Furthermore, Virgo has great respect and admiration for her faith figure, Jesus Christ, who she regards as the true descendant of God, not caring about the other Avatars or emanations of the Creator. She, like her mother, sees Jesus Christ with immense importance and devotion, with the difference that her mother sees Jesus as more important than God Himself, while Virgo sees the two as equals. Despite being extremely old for human lifespan, she still wonders about the universe as much as anyone else, asking herself diverse questions about reality and the world around her.

Once, Satan appeared to her and knowing the anger she had with Yahweh, he asked her to be part of his group. However, Virgo refused without a second thought, as she knew the Serpent and knew that trusting him was the same as walking next to someone you know will betray you and still walking with him. Virgo mentions that she doesn't like Yahweh, but not to the point that she wants to side with Satan.

Virgo is an entity with incredible powers, being a better user of magic and sorcery than many humans. Virgo over thousands of years has acquired countless abilities that allow him to perform great deeds, including the ability to assume human form. With the Eyes of Creativity, Virgo is omnipotent, omniscient and omnipresent on a Megaversal scale, being able to create and destroy countless multiverses and universes with a mere thought.

Virgo Durand Leroy is an original character created by prominent admin and editor Had3s1235 for the Gods and Demons wiki. Her name Virgo was based on the constellation Virgo, which is the sign of Had3s1235.

Virgo with the Eyes of Creativity (Art by Maquenda)

Virgo as the embodiment of the Megaverse (Art by Widdershins-Works) 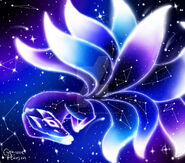 Goddess Virgo is sleeping among the stars (Art by TheWittleSheep)