Gods and Demons Wiki
Register
Don't have an account?
Sign In
Advertisement
in: Articles that need art credits, Races, Monster,
and 8 more

Lycanthropes, Wolf Man, Children of the Moon, The Demons of the Night

A Werewolf is a mythological or folkloric human with the ability to shapeshift into a wolf or an anthropomorphic wolf-like creature, either purposely, by being bitten or scratched by another werewolf, or after being placed under a curse. This transformation is often associated with the appearance of the full moon, as popularly noted by the medieval chronicler Gervase of Tilbury, and perhaps in earlier times among the ancient Greeks through the writings of Petronius.

The werewolf is a widespread concept in European folklore, existing in many variants which are related by a common development of a Christian interpretation of underlying Indo-European mythology which developed during the medieval period. From the early modern period, werewolf beliefs also spread to the New World with colonialism. Belief in werewolf develops parallel to the belief in Witches, in the course of the Late Middle Ages and the Early Modern period.

The first werewolf was Lycaon of Arcadia, an ancient Greek king who was cursed by Zeus in a fit of rage and disgust by Lycaon's habit of sacrificing children. Lycaon would be the progenitor of all werewolves to follow and is the most powerful werewolf on Earth.

When a newly formed werewolf is born, they are capable of shifting only when under the full moon. However, as the werewolf grows older he gains more experience with his transformation and powers, and thus are no longer bound by the cycle of the moon. These werewolves shift at will, unaffected by the moon. Shifting takes a great deal of effort, and werewolves need to replenish their energy after shifting. Normally, when werewolves are in their human forms, it is very difficult to discern their lycanthropic nature and as such can quite easily blend in with humans although other supernatural beings can identify them and even other humans whom have experience dealing with the supernatural. However, their most notable features are their bright amber eyes which is similar to that of a vampire's crimson eyes along with their well-defined and fit physique.

A werewolf is typically seen as a noble and honorable warrior. They also have pride when it comes to the type of clan that they are descendants from. This in turn could make werewolves of a royal class in their species. This is mostly seen in a tribe of werewolves. Much of werewolf society is organized into tribal groupings. A tribe will consist of a bunch of packs affiliated by blood or alliance. Tribes do not usually live together, but do gather periodically to reaffirm bonds and discuss and rule on important issues. Each tribe, in one form or another, is nominally ruled over by council of elders made up of the most powerful pack leaders and mothers within the tribe.

When it comes to a pack, instead of a tribe, it is mostly molded into a family, biological or adoptive, of werewolves who live and function together as a unit. The emotional ties of the pack are very strong and are the central focus of werewolf existence. An alpha wolf along with a beta possesses a unique but powerful blade known as the Bloodline Blade which has been passed down through their generations in their family. These blades hold the power of a Wolf Spirit that resides within the blade itself. They can only be passed down to one who is of relation to the ancestors of a werewolf clan, for if the blade will be wielded by a random werewolf, it will just be an ordinary sword. It shows that the blade is in sync and connected to one who is of blood to the previous owners of the blade.

Werewolves are primarily known for being male in wolf form, possessing a humanoid form that combines the traits of a man and a wolf, although there are female werewolves as well. Werewolves are usually seen and illustrated having the physical features of a man, but with fur and a wolf's face and snout, although sometimes mixed between the human face and the wolf face (as you can see in the illustration below from Kmjoen) . While werewolves typically appear in popular view as both wolf and human, some tend to appear with more human-body traits than wolf-body traits, usually second- or third-generation Werewolves.

A Werewolf beside the Full Moon (Art by elgrimlock) 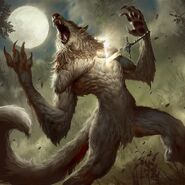 A wounded Werewolf with a silver sword (Art by ???)

The true form of a Werewolf (Art by akreon)

Some Werewolves (Art by Sandara)

A mighty Werewolf (Art by ZsoltKosa)

A Werewolf going to attack a village (Art by BobKehl)

A Werewolf warrior (Art by YamaOrce)

A giant Werewolf (Art by Manzanedo)