Gods and Demons Wiki
Register
Don't have an account?
Sign In
Advertisement
in: Beings, Demon, Lust Demon,
and 7 more

Apocalypse, The Beast from the Sea, New World Order

Beast of Sea, Beast of Earth, Lucifer, Satan, among many others

The Whore of Babylon is a demon that will rise during the Apocalypse, she is the personification of all the sins of the Earth. She appears mounted on a red beast, in contrast to the Knight who is called "Faithful and True" and is mounted on a white horse.

Whore of Babylon, also known as "Babylon the Great, Mother of Prostitutes and Abominations of the Earth," "Mother Harlot" or the Harlot for short, is an allegorical and apocalyptic figure of evil and one of several incarnations of evil that is said to plague the world during the end days as written in the Book of Revelation, She is depicted as a beautiful woman who is "the mother of all harlots and of all abominations of the world."

She appears as wearing a purple robe. The color purple was associated with the Roman Empire. The beast she rides has seven heads and Rome has seven hills, so the heads could reflect the ancient power of Rome, which traditionally was one of antiquity's most powerful empires. Alternatively, the heads of the beast could represent the seven great kingdoms of the ancient world and their rulers.

Like Satan, the Beast of the Sea, the Beast of the Earth and Lucifer, she will wage war against the Lamb of God and will be defeated by the breath from His mouth and cast into the Lake of Fire and Brimstone. She represents the Great Babylon, or New Babylon, which will be raised to honor Antichrist, in contrast to the Son of God, who is betrothed to the New Jerusalem.

She is depicted being dressed in blue and red, and adorned with gold, precious stones and pearls. He held a golden chalice, overflowing with abominations and everything that belongs to deceit and its prostitution. On his forehead was written "Mistery, Babylon the Great, the mother of harlots and abominations of the Earth."

During the beginning of time, Therion was split into many pieces to stop him from causing the destruction of all. While his body became the Primordial Beasts, his intelligence lingered. This intelligence was known as the Whore of Babylon.

Babalon wished to bring Therion back to his original form, but knew she couldn't do it directly. Instead, she hid in the shadows, quietly waiting and planning. She would help the Antichrist form the New World Order in order to lessen the time between then and the Apocalypse.

During the Apocalypse, her plan would finally be complete. She would finally come into contact with the other pieces of Therion once they're inside the Lake of Fire, becoming the Primal Beast once again.

The Whore is associated with the Beast of Revelation by connection with an equally evil kingdom. The word "Whore" can also be translated metaphorically as "Idolatress". The Whore's apocalyptic downfall is prophesied to take place in the hands of the image of the beast with seven heads and ten horns. There is much speculation within Christian eschatology on what the Whore and beast symbolize as well as the possible implications for contemporary interpretations.

Caroline Vander Stichele (2000) demonstrated that the narrative of the Whore of Babylon follows many of the same patterns of the personification of capital cities as women who commit "prostitution / whoredom" and/or "adultery" in the prophetic books of the Hebrew Bible. These capital cities, representing the states they govern, are alleged to have committed various sins that have rendered them sexually promiscuous, and therefore they will eventually be annihilated through various well-deserved violent punishments sent by the Israelite God Yahweh.

A book talking about the Whore of Babylon (Scene from Supernatural) 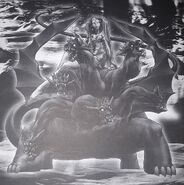