Gods and Demons Wiki
Register
Don't have an account?
Sign In
Advertisement
in: Beings, Scientology, Mythology,
and 4 more

The Galactic Confederation, Council of Godheads

Xenu was, according to Scientology founder L. Ron Hubbard, the dictator of the "Galactic Confederacy" who brought billions of his people to Earth in DC-8-like spacecraft 95 million years ago, stacked them around volcanoes, and killed them with hydrogen bombs. In reality, everything written by Hubbard is inflammatory slander used to tarnish what used to be a benevolent ruler of the galaxy.

Xenu was the ruler of a Galactic Confederacy 95 million years ago, which consisted of 26 stars and 76 planets including Earth, which was then known as "Teegeeack". The planets were overpopulated, containing an average population of 178 billion. The Galactic Confederacy's civilization was comparable to our own, with aliens "walking around in clothes which looked very remarkably like the clothes they wear this very minute" and using cars, trains and boats looking exactly the same as those "circa 1950, 1960" on Earth.

As an immortal cosmic entity, Xenu can take on many different forms.

One of his forms is of a gray alien creature with a red suit. They have yellow glowing eyes and thin black eyebrows. Xenu has a bunch of tiny gray tentacles on his head and a flap over his mouth that wiggles when he makes noise. Xenu's arms are gray tentacles.

The first mention of the name Xenu (or Xemu) comes from a written letter by Hubbard that reads:

The name has been spelled both as Xenu and Xemu. The Class VIII course material includes a three-page text, handwritten by Hubbard, headed "Data", in which the Xenu story is given in detail. Hubbard's indistinct handwriting makes either spelling possible, particularly as the use of the name on the first page of OT III is the only known example of the name in his handwriting. In the "Assists" lecture, Hubbard speaks of "Xenu, ahhh, could be spelled X-E-M-U" and clearly says "Xemu" several times on the recording. The treatment of Revolt in the Stars—which is typewritten—uses Xenu exclusively.

It has been speculated that the name derives from Xemnu, an extraterrestrial comic book villain who first appeared in the story "I Was a Slave of the Living Hulk!" in Journey into Mystery #62 (November 1960). He was created by Stan Lee and Jack Kirby. Xemnu is a giant, hairy intergalactic criminal who escaped a prison planet, traveled to Earth, and hypnotized the entire human population. Upon Xemnu's defeat by electrician Joe Harper, Xemnu is imprisoned in a state of continual electric shock in orbit around the Sun, and humanity is left with no memory of Xemnu's existence. 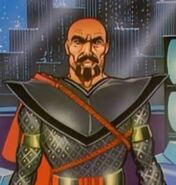