Gods and Demons Wiki
Register
Don't have an account?
Sign In
Advertisement
in: Beings, Demon, Hell,
and 4 more

Yetzer Hara, known by his pet name Hara, is an incredibly powerful Demon who works directly for Satan.

Yetzer Hara is not a demonic force, but rather man's misuse of things the physical body needs to survive. Thus, the need for food becomes gluttony due to Yetzer Hara. The need for procreation becomes sexual abuse, and so on personified into a demon.

He is often compared to other demons who use "The Devil" title like the aforementioned Satan, along with Lucifer, Iblis, Samael, Yaldabaoth, Beelzebub, Mephistopheles, and Belial.

Yetzer Hara was one of the first demons created by Ayin to fight God. They eventually lost to God. Hara fell into Hell, and became the ruler of the realm.

Threat to the throne

After the War in Heaven, Lucifer was locked up in a cage, during this moment Yetzer Hara was terrified, terrified that Lucifer would steal his place upon Hell's throne. Hara tried to make preparations but every being who would help him were on the side of Lucifer.

When the Fallen Angels eventually freed Lucifer, Hara silently and peacefully handed over the throne to Lucifer. To this day he wishes to have his throne back, but knows that he is no where near as powerful as Lucifer is. 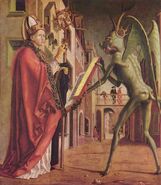