Gods and Demons Wiki
Register
Don't have an account?
Sign In
Advertisement
in: Beings, Throne, Angel,
and 6 more

Zaphkiel, also known as Tzaphkiel, is a True Archangel of Wisdom and the Planet Saturn, he is an angel associated with Binah, the Superior Mother on the Tree of Life.

Zaphkiel is an Archangel of Judaic lore whose name means "God's knowledge" or "The Beholder of God". He is the angel of deep contemplation and is associated with the Name of God called Elohim and the planet Saturn. He presides over the Aralims (Thrones) of Judaic lore.

Zaphkiel is said to represent the feminine aspect of God's creation. He gives blessings to those who stengthen their faith, work to increase their understanding and impart wisdom that improves their spiritual growth.

In the Kabbalah, Zaphkiel is said to be the angel who represents "Binah" (understanding) on the Tree of Life.

Zaphkiel (Hebrew: צפקיאל‎), also written as Tzaphqiel,Tzaphkiel, Zafkiel, Zafchial, Zaphchial, Zaphiel, or Zelel, is an archangel. His name means "God's knowledge". He is sometimes equated with Jophiel/Zophiel, but other times considered to be a different angel. Zaphkiel is "chief of the order of thrones and one of the 9 angels that rule Heaven; also one of the 7 archangels." He can watch people when they need to make important decisions and when they need to put them into words for others. If they are unsure of the words, he will help them to make the message more clear. The leader of the Erelim, he is associated with the planet Saturn. It is associated also with the sephira of Binah. He is also called Cassiel or Binael.

Although not a well-known angel, Zaphkiel has inspired some authors to create their own angels. For example, Zaphkiel was the inspiration for Kurumi Tokisaki's angel from Date a Live, where he is an angel associated with time. In the anime Gabriel Dropout, one of Zaphkiel's names served to be the name of the protagonist's older sister, the angel Zelel. Zaphkiel was also an angel in the Shin Megami Tensei game, where he is called Tzaphkiel. 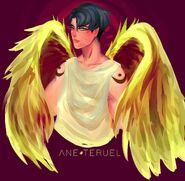 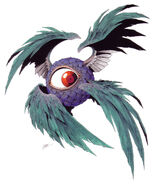 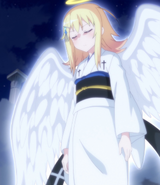 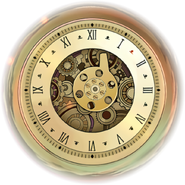 (Art from Date a Live)